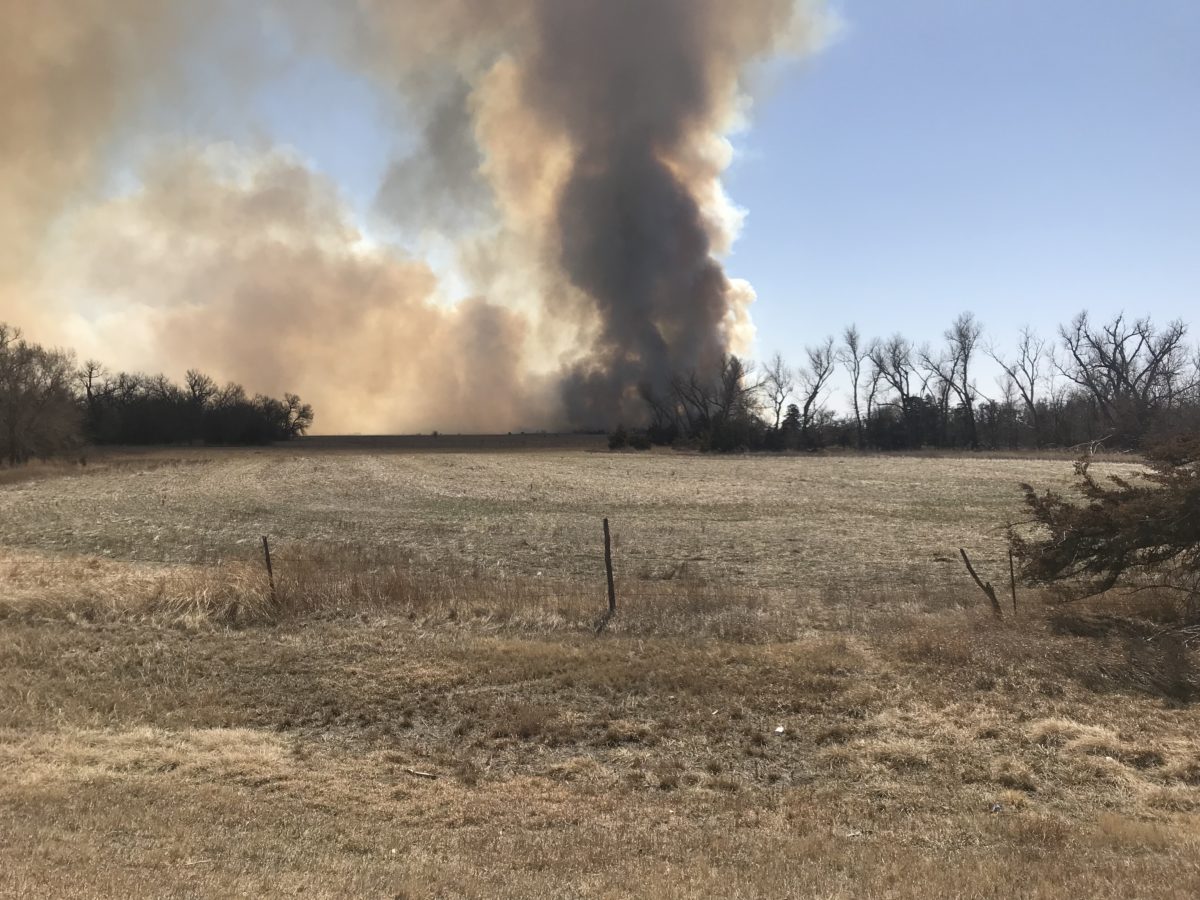 On Wednesday, March 14, shortly after noon, several grass fires were started two miles directly south of the Sandhill Prairie Farm, my childhood home and where my parents still live.

The fire quickly grew into the very definition of a wild fire and traveled several miles straight north, pushed by the 30 MPH winds blowing from the south, in just a matter of minutes. In less than ten minutes it had grown beyond anything that could be controlled and continued to grow wider as more and more brush and bone-dry grassland blazed.

It is incredibly fortunate that my mother, by chance, looked out the window in time to see the smoke rising just barely more than a mile away. She quickly gathered the grand kids and left the farm, alerting my dad in the process. He was 20 miles away meeting with a prospective client but quickly abandoned the meeting and drove home. He arrived just minutes before the smoke and heat of the fire overtook the entire property. This was just enough time for him to turn on sprinklers around the house, which as it turned out is the only reason their home remained standing after the fire died down.

I was able to drop everything and drive 20 miles to the farm the moment my dad called to let me know about the fire. Unfortunately I was unable to reach the property as the smoke and flames were already too intense. I managed to get within one mile of the property just as my dad was leaving. The flames had already engulfed the trees around the driveway so he was forced to drive across the fields to escape. Thankfully their neighbor thought quickly and and began opening all of the gates in the pasture when he saw the fire. He knew that neighbors (my parents) and fire crews would need to drive through the fields to get to and away from the flames.

Just moments after my dad and I connected on the side of the road, an enormous plume of black smoke shot into the sky. We guessed that the smoke was a sure sign of the house going up in flames. Luckily it turned out to be smoke from the barn igniting instead. The barn had 20-30 gallons of gasoline and diesel fuel in it, so there was no hope for anything in there to be salvaged.

It was probably two hours later before my dad dad I were able to get back to the property as the smoke and flames were so intense. We assumed everything was lost but on a whim and while waiting for smoke to clear, we thought to check if the Nest thermostat was responding. Amazingly it was! It indicated that the temperature in the house was 70 degrees F and even allowed us to change the temperature! That mean the house was still (at least mostly) standing, had power, and even had WIFI!

Once we learned the house was still there, we rushed in as quickly as we could in the case any part of it was burning. Time was of the essence to save it.

After driving through thicker smoke that anyone should and across several fields (trees had already fallen down across the roads going into the property), we managed to reach the house and see for ourselves that it was indeed still standing!

The house was safe but there was still fire burning every where. We worked quickly to extinguish as much as we could, starting with all of those nearest to the house. The house had survived the worst of the fires, we’d be damned if we were to let it burn down now!

As we worked, we were reassured that more help would be arriving shortly. My twin brother, older sister and her husband were all on their way from Kansas City. They each left minutes after hearing about the fire and arrived as quickly as they could.

Two structures survived the fire: the house and the chicken coop. Miraculously the chickens were sitting inside their coop completely unharmed. The fire burned everything around the coop, but somehow went around the chicken’s strong hold. My dad had intentionally opened the door to the coop so the birds could flee and have their best chance at survival. Perhaps it was the chickens’ stupidity that made them stay put or maybe it was some sort of brilliance that told them it was the safest place for them. Whatever made them stay, their happy squawks were a welcomed symphony as we stood there amid desolation.

Shortly after we began working to extinguish remaining flames, all water pressure from the well died. Upon inspection, a burning tree and fallen over and melted the end cap for the well, including the wires providing power to the pump, 40+ feet underground. This meant we had no more water to help put out and prevent fires overnight.

We worked quickly to hook up an irrigation pump that was kept next to the pond. This would allow us to pump 100+ gallons per minute into sprinklers, but we had a problem: all of the hoses had been laying on the ground and were now little more than molten rubber. We quickly searched the grounds for any hose that had managed to survive and luckily found three. This meant we could hook up sprinklers and pump water from the pond to wet the yard and all areas around the house.

The problem we kept running into was that all of the tools and supplies, things we needed to help put out and prevent fires, had been kept in the barn, which sat as nothing more than a smoldering pile of rubble. A little creativity and a lot of desperation aided us though and we were able to take care of what needed done to protect the house and restore facilities.

By evening we felt fairly certain the house would make it through the night, but we weren’t going to chance it and so everyone spent the night at my wife and I’s house 15 miles away.

As we were leaving, another huge fire flared up a few miles to the west. We knew that we were probably safe as everything had already burned but that meant the night wasn’t even close to over for the emergency responders.

After a few hours of sleep and some much needed detox, we returned to work in the morning. Our goal was simple: restore power to the well so that we can have water again. This ended up taking most of the day but with some duct tape and hose clamps (no joking), we succeeded.

The next immediate problem was that there were large trees falling down everywhere. The fire had burned out the bottoms of trees, leaving them standing on just splinters. With a little wind (we had 30-40 MPH gusts that day), the trees toppled easily. This posed, and still poses, a huge safety risk to anyone walking around the farm.

We will be cutting down dead and dangerous trees for months or even years.

Wild fires are terrifyingly powerful beasts with no mercy for anything in their path. It’s difficult for me to understand how anyone could intentional set a fire that unleashes such incredible destruction. Unfortunately it’s widely assumed that the fires were the result of an arsonist that intentionally set multiple blazes a lite minutes apart from each other.

With just a few matches, someone destroyed decades of work and life. That’s hard for me to comprehend. 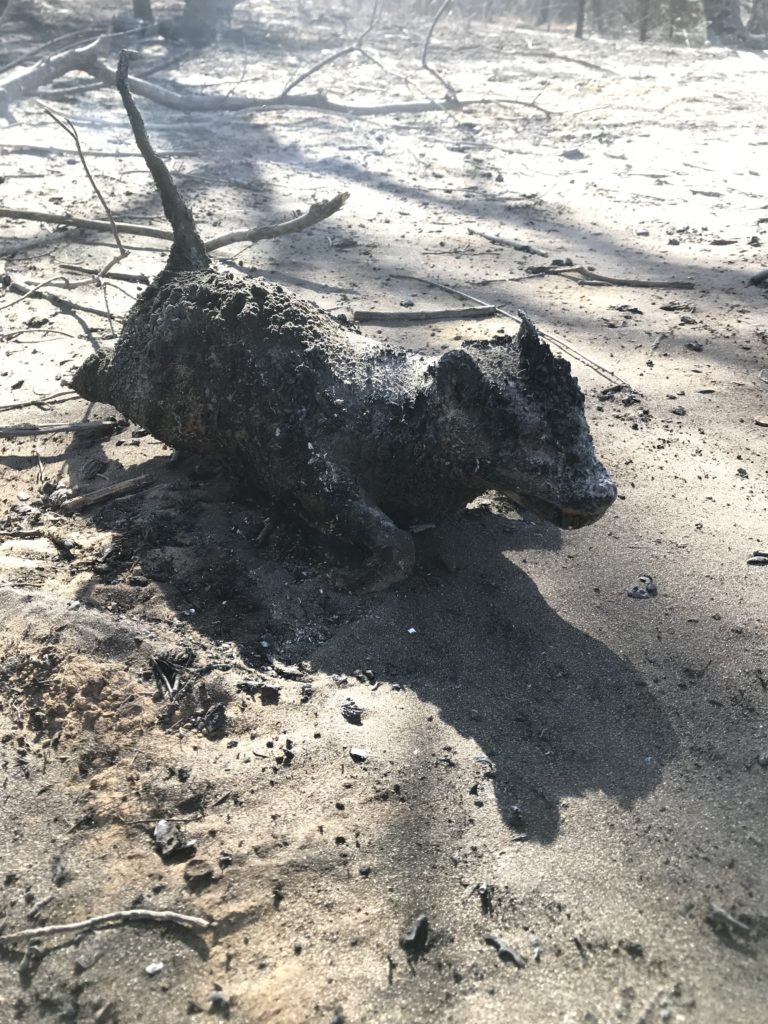 This morning I was meant with an intense sadness as I watched a badly burnt raccoon, who had had its eyes burned out and feet scorched, try desperately to quench its thirst at the pond. My mother and I did our best to help the poor creature but our efforts were futile as it ran from us, afraid for its life. Who can blame it? The poor thing spent a tortuous last 72 hours trying to stay alive as the world around it went up in flames. I hope only that it finds a peaceful, painfree death or that it miraculously survives and is able to happily live our its days in a world of lush vegetation and bountiful food sources. 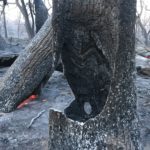 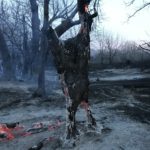 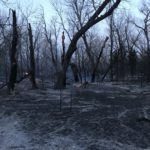 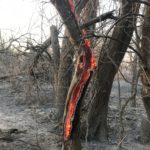 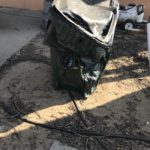 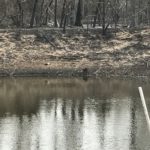 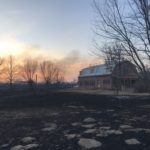 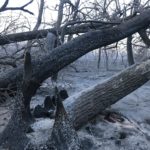 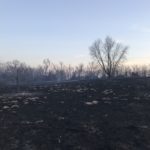 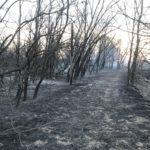 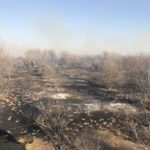 In all of this, we need to remember that while incredibly destructive, fires bring new life. In just a few weeks, what is now black and burnt will be flush with green and new life. Already today the birds are singing a cheerful chorus, beckoning on the coming rain and spring time.

It’s hard, but we should probably spend more time listening to the birds.

My sister has set up a fundraiser to help my parents replant their orchard and rebuild. If you’d like to contribute, all amounts are greatly appreciated.